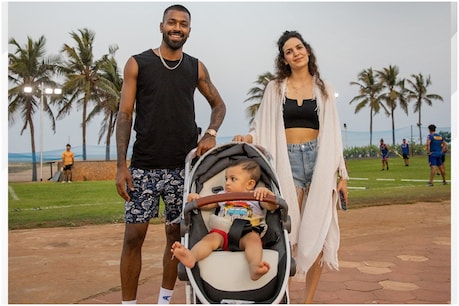 India and Mumbai Indians (Mumbai Indians) all-rounder Hardik Pandya (Hardik Pandya) said on Wednesday that he realized the importance of mental health while playing for India. He credited the family for maintaining themselves mentally strong.

New Delhi. India and Mumbai Indians (Mumbai Indians) all-rounder Hardik Pandya (Hardik Pandya) said on Wednesday that he realized the importance of mental health while playing for India. He credited the family for maintaining themselves mentally strong. Hardik said that while playing international cricket, I realized that as a player you are under pressure. Your personal life also changes. But as a person you should come to deal with all these things. He said this in a video posted on mumbai indians’ official Twitter account.

Hardik said it showed me how important mental health is. The family was instrumental in my case. He helped me a lot in staying mentally strong. He further said that the corona epidemic has forced players to stay in the bio-bubble for a long time. Where your life is bound. You keep swinging between the stadium and the hotel bus. In such a situation, players have become aware of mental health.

🗣️ “Just make sure in the day that you’re doing some activity which is adding to your fitness.”

Hardik also made people aware of fitness 27-year-old Hardik will take on Royal Challengers Bangalore in the opening match of the IPL on Friday. Hardik, who has played 60 ODIs and 48 T20Is for India, also made people aware of physical fitness on the occasion of World Health Day (World Health Day 2021). He said you should try to stay fit every day. For this you can associate yourself with any kind of activity. Whether running or playing outdoor sports. It will be good for your health.

In this video, Hardik’s brother Krunal, who recently made his ODI debut for India, said that we not only work on physical fitness but also strive for inner happiness and peace. When we work hard, we make sure to get at least eight hours of good sleep and laugh freely for 4-5 hours.